Many years ago (I think it was 2002), I participated in a Row Robin at the Squanicook Colonial Quilt Guild.  A Row Robin is similar to a Round Robin, where everyone is assigned into a group that will create parts of a quilt for each other.  For this project, there were six of us in our Row Robin.  The guidelines were that the row should be 36″ wide, made with 6″ or 9″ blocks.  Everyone started by making their own row. 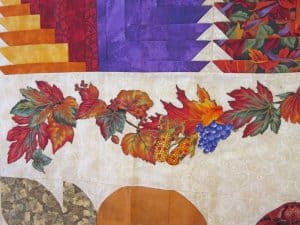 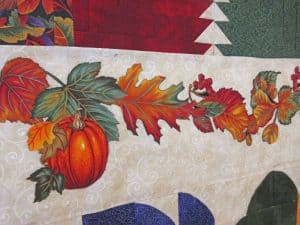 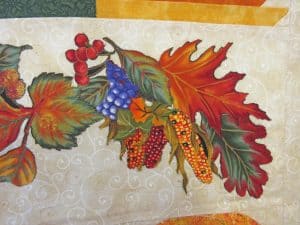 At the time, I had just discovered Broderie Perse, and decided to try it.  Luckily, I found a beautiful autumn fabric with leaves, corn, pumpkins, etc., which I fussy-cut and laid out in a garland.  This was easy with fusible applique.

I packed a few other things with my row, such as notes to guide the rest of the group when they added their rows:  theme, colors, etc.  Also added was extra background fabric so there would be consistency across the quilt.  I also included a label that everyone could sign. Then I passed the packet on to the next person in the group.  In the meantime, during the next month, I worked on a row for someone else’s quilt.  Each month we worked on a row then passed it on to the next quilter.

During the seventh month, we had the grand unveiling at our guild meeting.  What a great surprise to see all the rows together in a quilt top!

Fast forward to 2021, I finally pulled out the box with all the rows.  I decided to tweak the quilt top a bit by rearranging the rows, then I added a 1-inch border of the background fabric to float the design a bit. 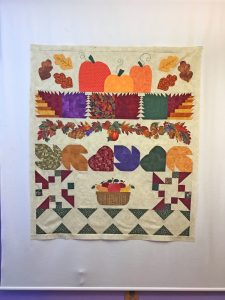 Now I need to decide on a border.  I pulled a couple of fabrics from my stash that I thought could work. 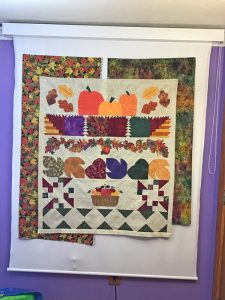 Now to decide the width of the border.  The rows are 6″ and 9″.  I laid out the top with a 6″ border, but it’s a bit overwhelming.  Four inches will work better, I think. 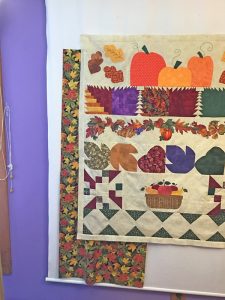 And here’s the finished top, 18 years in the making.  No more Row Robin UFO. 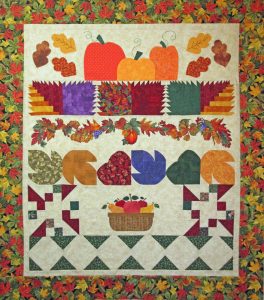 Thanks to Beth Helfter, Terry Duggan, Harriet Pindell, Angie Callbeck, and Maria DeMarco for helping me to create a beautiful quilt top.  And thanks to Me of 2002 who had them all sign a label; otherwise I would never have remembered who worked on it. 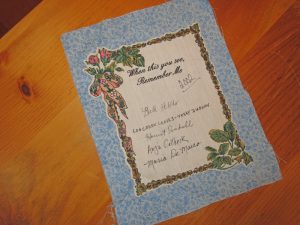 Next week I’ll be working on writing new patterns.  I’ll try to get some sewing done too.  Till then,