The center is complete on Solitaire, and now I’m adding the borders.

The next two borders are strips of fabric.  You don’t want to simply sew the strips on and cut off the ends to match.  No, no, no!  You need to measure the left side, down the middle, and the right side of the completed center.  In a perfect world, all three would measure 53″ long. 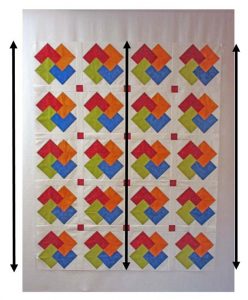 If the three numbers are different, average the three numbers, and use that number for the length of your strips.  Sew the two red strips to the sides, pinning the center and the ends, then measure again.  Measure across the top, middle, and bottom of the center section, including the two side strips you just added.  Again, the measurement should be 42″, but use the numbers you get and average them.  Use that number to cut your strip length, then add the top and bottom red borders.

Then you get to start all over again to add the second white border.  Measure, cut, pin, and sew the white border on all four sides, two at a time. 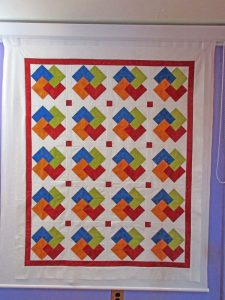 The third border on Solitaire adds a lot of interest to the pattern because it is pieced, not just a simple strip.  I will use the mirror-image Combination Blocks with the large triangle on the right to create the border.  Lay out the four different Combination blocks, and sew them together in sets of four.  Make sure to match those points!  There is extra work here in matching and pinning points, but it is *so* worth it for the final effect in that pieced border. 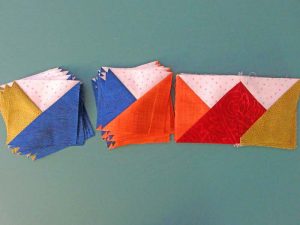 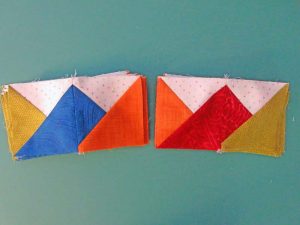 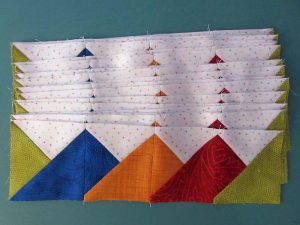 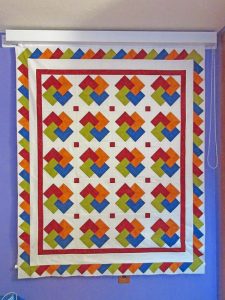 Add the four Half-Square Triangle blocks to the corners to create the wrap-around effect. 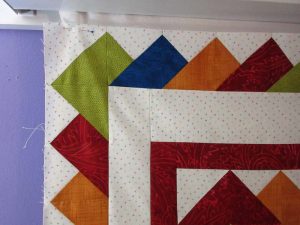 Then add the last blue border with orange cornerstones (measure, cut, pin, sew), and it is done! 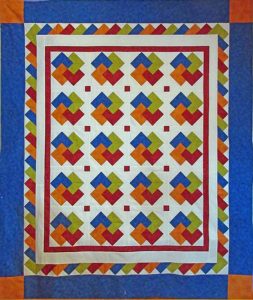 You, too, can make your own version of Solitaire.   Join us at Divine’s Fabric Nook in Cranston, RI the weekend of February 21 to 23, 2020.  If you can’t join us, you can buy the pattern by emailing me at Kathie@KathieBeltz.com.

Come visit again soon to see my next project.    🙂