Here comes UFO #3.  I think this project was from a retreat in 2007, so 13 years ago. The reason this is a UFO to begin with is because it became a series of lots of little lessons.  Every time I made a questionable decision on this project, I put it away until I learned what to do and what *not* to do.  Yup, 13 years worth of starting, messing up, stopping, and giving it a time-out.

So, at the retreat, we were making a quilt from Sara Nephew’s Big Book of Building Blocks Quilts, with 60 degree triangles to create a 3-D image. 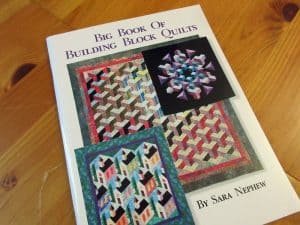 We were working on Honeycomb Waffle, sort of a tumbling blocks design. 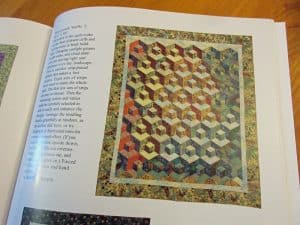 Notice that this is a rectangular design.  Everyone was making a rectangular Twin-size quilt.  But no, not me.  This was about the time I started getting adventurous and not necessarily following the pattern.  I decided to make something different, not just a boring rectangle.  After all the units were made, I played around to create this weird asymmetric design. 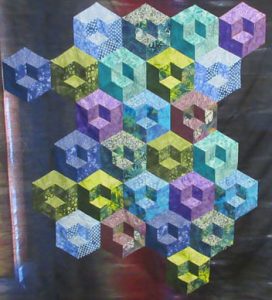 That’s pretty cool, but now what?  How do I figure out piecing for the background to ultimately make it rectangular?  Aha!  I come up with this idea to piece all the units together, then applique the entire weird shape onto a background.  I thought it was brilliant!  I wouldn’t need to do more math to figure out the piecing – I’d just slap it onto a background fabric.  Looking for the fabric became Time Out #1.

I remember searching for a background fabric that would highlight the piecing but wouldn’t be boring.  I wanted something with a little interest.  I finally found this dark fabric that was sort of tie dyed.  It was standard width, so I had to cut and piece it to make it wide enough.  I bought all the fabric left on the bolt, but it wasn’t enough.  So I had to fudge.  Another not-so-bright idea.  This was Time Out #2.

Great, background finally is pieced.  The top to be appliqued onto it is pieced.  Time to applique.  Now, I am not an applique quilter.  I had only made one applique quilt before this, and that was machine appliqued.  I decided that I didn’t want the applique stitches to been seen, so I needed to hand applique.  Yes, I’m going to hand applique the entire top.  I was so ambitious back then! For some reason, I don’t remember why, I turned under and basted the 1/4″ seam allowance all around the outside of the top.  At this point I was tired of the project.  Time Out #3.

Some time later I pulled out Honeycomb again, and went to my local quilt shop where I could push some tables together, lay everything out, and pin the top to the background.  My back needed a break after that, so on to Time Out #4.

I finally got back to Honeycomb, and started to hand applique with silk thread.  I was taught that the silk thread would disappear if stitched properly, so that’s what I used.  Silk is nice and thin, and really does disappear. But it’s also very slippery, so the applique takes longer because you have to be careful with it.  Remember, I’m a newbie to applique, so it took me a long time to get about half-way around the top.  Yup, I gave up there.  Time Out #5.

And now we come to 2020.   I finally decide to work on UFOs, and this came out from the pile.  I’m determined to finish this project in some way, shape, or form.  I go back to applique with silk thread. 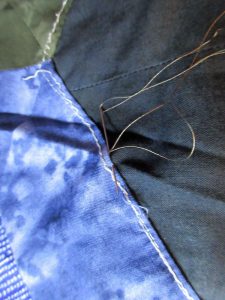 You can see my basting stitches along the outer edge of the top, the pieced background, and that slippery silk thread for my hand stitches.  Actually, this is a good project to work on downstairs in the air conditioning when it’s too hot to work upstairs in my studio.  So I plug along and finish the applique.

Once the applique is done, I hang it up on my design wall. 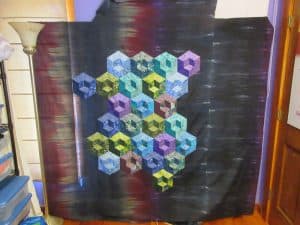 Yikes!  What was I thinking?!?  It’s not centered, and the background piecing is awkward.  I was frustrated after all that work.  I almost put it away again, but I had promised myself to finish it.

So after staring at it for a few days, I re-pieced the right section of the background.  I couldn’t just cut off some fabric to make the two sides even, because I’d lose a lot of the tie-dyed effect.  So I cut off the seam, trimmed down the third piece on the left side, then re-attached.  Then I cut off the extra fabric on the top and bottom to square it off. 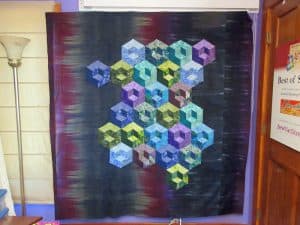 Now, after all those years and all that work, I’m just not crazy about it.  I probably should have given up on it a long time ago and used the fabric for another project.  And yet this was one of those UFOs that I didn’t clean out and give away.  For some reason I kept going back and trying to fix it.

At least I can say that the top is done. Yay!

I’m taking suggestions for improvements.  I’m not quite sure what to do with it.  (Although it may just end up being donated to my guild’s next UFO Auction.)